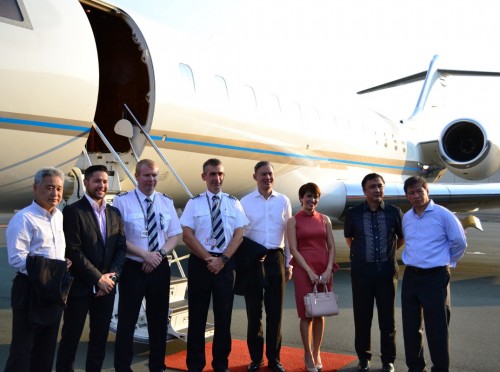 “With the rise in demand for tourism and business travel, Pacific Global One is positioned to capture this niche for chartered flights. With our new service, Pacific Global One can now provide private flights to Balesin in Quezon, Amanpulo in Pamalican Island, Baguio in the north and Boracay in Panay, among other routes,” Pacific Global One President and CEO Rene S. Meily was quoted as saying in a statement.

The Beechcraft Super King Air 350 is a turboprop twin that can fly for five hours and accommodate eight passengers with two pilots, while the Bell 429 helicopter can fly for three hours and has a seating capacity of five.

Mr. Meily noted the rates of the chartered flights are competitive, but did not give figures.

“We also open our doors to small groups who need an affordable, reliable, and accessible transportation to go to various destinations nationwide — whether for work or leisure,” he said.

Pacific Global One also has an AW139 helicopter, and a Global XRS, which is a long-range business jet, which are for the private use of companies led by PLDT Chairman, CEO and President Manuel V. Pangilinan.

PLDT’s foray into chartered airline service is seen as a move to try to increase the group’s revenues.

“Whatever adds to the activity of PLDT is long-term good. They need more projects to bring up their financial growth. Their market technically is long term upward and mid term consolidation,” Harry S. Liu, president of Summit Securities, said via text message.

Luis A. Limlingan, managing director at Regina Capital Development Corp., said the chartered airline business would bring an additional source of revenue to PLDT. However, he noted Pacific Global One’s small fleet will not have a huge effect on PLDT’s revenues and income.

“Rather than just letting those planes sit in the hangar idly, might as well use them for additional sources of revenue. Although with the current number of planes, it won’t significantly impact the top line and bottom line,” Mr. Limlingan via text message.

“If they plan to scale it further then it should be worth re-evaluating. Perhaps they can pattern it after AirJuan for now,” he added.

Hastings Holdings, Inc., a unit of PLDT Beneficial Trust Fund subsidiary MediaQuest Holdings, Inc., has a stake in BusinessWorld through the Philippine Star Group, which it controls.