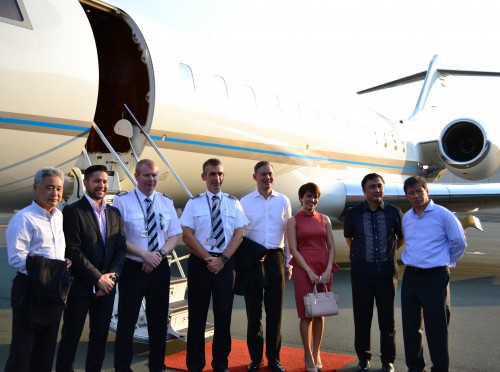 By Iris Gonzales (The Philippine Star)

MANILA, Philippines — The group of business tycoon Manuel V. Pangilinan is making its foray into the chartered airlines business, a still relatively small but luxurious industry catering to businessmen and the well-heeled crowd heading to different destinations around the country, either for work or pleasure.

Pacific Global One, the aviation arm of the MVP Group of Companies, launched recently new air services now open to the public.

These services include the rental of a King Air 350 plane and a Bell 429 helicopter – which are for originally just for the exclusive use of MVP Group executives for official business.

In an interview with The STAR on the sidelines of the company’s cocktail event announcing the new services, Pacific Global president and chief operating officer Rene Meily said the company received its license from the Civil Aviation Authority of the Philippines (CAAP) a few months ago. The license allows the company to provide chartered flight services to the public and not just for private use.

We got our license just a few months ago,” Meily said.

Thus, he said, the company is now open for business.

“We want people to know that we are open for business and that we have quality aircraft flown and maintained by world-class pilots and engineers,” Meily said.

“Those who want to have, say, lunch at Antonio’s (in Tagaytay) and come back can use this,” Meily added.

He said the company could provide chartered flights to Balesin in Quezon, Amanpulo in Pamalican Island, Baguio in the north and Boracay in Panay, among other routes.

Meily said at present, the company’s fleet of choppers and a Global 5000 private jet are for the MVP Group’s private use.

“We were spun off as a separate company. We got a license to rent it outside so we’re doing that now,” he said.

By opening chartered flights to the company, Pacific Global also hopes to contribute to the growth of the travel industry in the country, Meily said.

“We will be talking to travel agencies. We want to help make travel affordable,” he said.

The company can offer chartered flights to small groups seeking to go to various destinations across the country for work or pleasure.

Meily said the rates they would offer are very competitive.

Pacific Global is owned by PLDT, Philex and Meralco, which are all part of the MVP Group.

Aside from the aviation business, the MVP Group’s other businesses include tollways and infrastructure through MPIC; power distribution and generation through Meralco and MGen; mining through Philex; water through Maynilad Water Services Inc.; and communications through PLDT.